Eelgrass in Maine is now closed to new submissions. To share what you’re seeing in the natural world, you can now create an account at CEHL’s new collaborative nature journal, Anecdata! 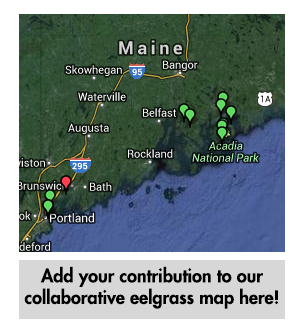 Scientists, interns, and volunteers at the Mount Desert Island Biological Laboratory (MDIBL) have been successfully restoring eelgrass in Frenchman Bay with community partners for six years. But this year, the marine plant didn’t come up, and not just in restored areas. Eelgrass throughout the upper bay didn’t seem to get its annual signal to send up shoots, and only rhizomes remain in the mud where eelgrass beds had been.

In order to find out the extent of this event along the coast of Maine, MDIBL is asking the public to look for eelgrass beds and report their locations, or where they missing from places where there had been beds in the past. The lab is asking people to search for the plant as soon as possible, because eelgrass’s growing season usually ends in August. END_OF_DOCUMENT_TOKEN_TO_BE_REPLACED 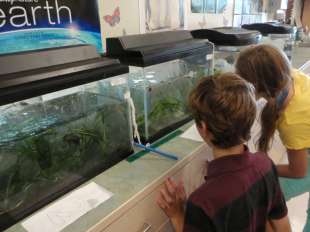 “Seagrasses in Classes” is an academic year education program in five Mount Desert Island region elementary, and two inland high schools. The program is a school-year extension of the Mount Desert Island Biological Laboratory’s efforts to restore and study eelgrass (Zostera marina) beds in northern Frenchman Bay. Eelgrass is a native seagrass that grows underwater in thick beds just below low tide in sheltered coastal areas and in river estuaries. Eelgrass is an essential component of the coastal marine ecosystem. It offers protection to small fish and shellfish and buffers the ocean from intrusions of sediment and pollution. Scientists and interns affiliated with MDIBL’s Community Environmental Health Laboratory have established a restoration site near Hadley Point in Bar Harbor, and are studying the efficacy of different methods of eelgrass replanting, the broadcast of eelgrass seeds by currents, and the population genetics of eelgrass communities.

END_OF_DOCUMENT_TOKEN_TO_BE_REPLACED

The Mount Desert Island Biological Laboratory (MDIBL) hosted a meeting and dinner for mussel harvesters from the Maine Mussel Harvester Association on January 31, 2013 at Gordon’s Wharf in Sullivan, ME. The gathering had a dual purpose: to appreciate the mussel harvesters for their collaboration on eelgrass restoration projects in the past, and to garner their input on proposed eelgrass restoration areas for the future. The mussel harvesters who attended either drag for “wild mussels” or they harvest “seed mussels” for aquaculture lease sites in Frenchman Bay. “The group here represents one hundred percent of bottom-dredge mussel processors in Maine,” said Ralph Smith, of Moosabec Mussels, “you’ve got Eastern Maine Mussels, Acadia Aqua Farms, Moosabec Mussels, and Atlantic Shellfish.”

END_OF_DOCUMENT_TOKEN_TO_BE_REPLACED 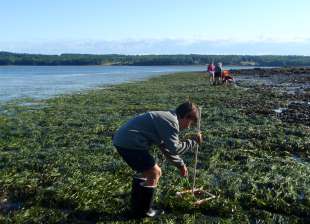 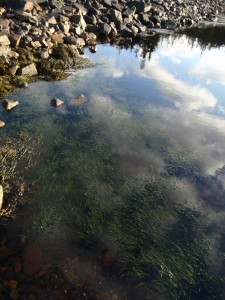