This year’s meeting was held at Mount Desert Island Biological Laboratory’s Dahlgren Hall. Fifty people were in attendance. The meeting began with three keynote presentations focused on the benthos of FrenchmanBay, followed by a panel discussion. In the afternoon, after a potluck lunch, attendees chose to attend one or more of three breakout sessions. There was a session on the Frenchman Bay Partners website, a session to meet committee members, and a session on market based approaches to conservation.

100% of respondents were very satisfied with the Frenchman Bay Partners second annual meeting. The majority of survey respondents said the length of the meeting was just right, although just over half of the respondents indicated next year they think the meeting should run from 9AM to 1PM and end with a potluck lunch (Graphs 1, 2). Some respondents saw the lunch as an informal networking opportunity. The speaker/panel discussion format was very popular. Additionally, respondents indicated they would like to see displays by Partners about their organizations, presentations of student work related to Partner goals and strategies, and an Executive Committee report at future meetings (Graph 3). Most people attended only one breakout session (Graph 4); those who attended the Committee Member breakout session said it was constructive to spend time with Committee members. A few individuals wrote in that committee reports would be interesting if they were kept short. Written responses included: “Keep up the good word. We are very fortunate to have FBP.” “Wonderful meeting. So grateful to be part of this group.”

Survey was processed via Survey Monkey. Click on chart to enlarge image. 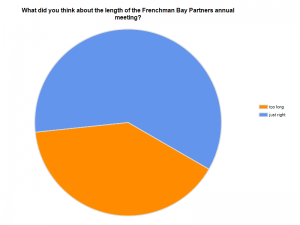 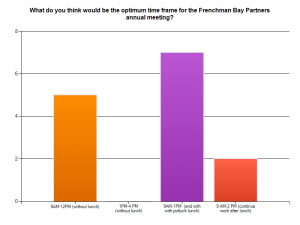 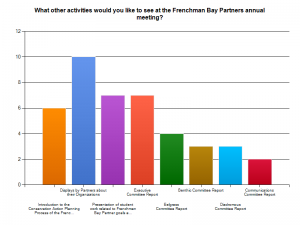 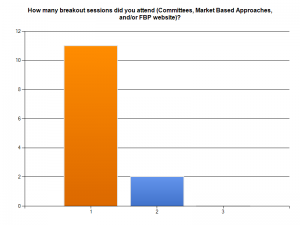