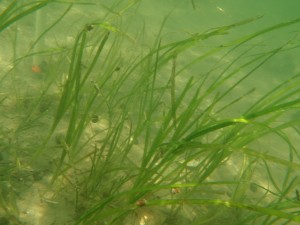 Along the coast of Maine, from the Piscataqua River to Passamaquoddy Bay, eelgrass populations are declining. What is eelgrass and why should we care?

Eelgrass (Zostera marina) is a flowering marine plant that essentially defines the coast of Maine. It grows in thick beds that provide shelter to commercially important fish and shellfish species and other organisms that make up near-shore food webs. The underground stems and roots of the plant help to stabilize bottom sediments, thus preventing erosion and promoting water clarity.

As if that weren’t enough, eelgrass also acts as a carbon sink. In other words, eelgrass uses CO2 in the process of photosynthesis and stores carbon in the ocean sediment. In Maine alone, eelgrass meadows sequester approximately 51,000 (+/-14,000) tons of carbon dioxide/year, or the equivalent of the carbon dioxide emitted from approximately 10,000 cars annually. Thus eelgrass plays an important role in reducing the impact of man-made carbon dioxide emissions and mitigating ocean acidification in Maine’s coastal waters.

Equally important however, eelgrass plants can absorb excess nutrients that get into the ocean through polluted run-off. Nutrient runoff from fertilized lawns, farms, and other sources, such as malfunctioning septic systems, is a larger contributor to ocean acidification than people think. Nutrients cause algal blooms in the ocean. When algae outgrow their environment, they die and sink to the ocean bottom. There, bacteria go to work, breaking down the algae. Under these circumstances, bacteria can use up most or all of the oxygen in a cove or bay, leading to what is called a “dead zone”.  In the process, bacteria produce carbon dioxide, a major culprit in coastal ocean acidification.

The Maine Commission to Study the Effects of Coastal and Ocean Acidification released a report on February 5, 2015 recognizing the importance of shellfish resources and risks of ocean acidification to Maine’s economy. The commission made recommendations to the State of Maine regarding the threat of ocean acidification, and legislative members of the group introduced four bills to protect Maine’s marine ecosystem and coastal economy:

We applaud this exciting development at the intersection of politics and the environment; however, a specific measure to protect and restore those habitats that are already absorbing CO2 from the water is missing.

Eelgrass can offset increasing CO2 levels from the atmosphere and absorb excess nutrients from polluted runoff, both of which can cause the acidity of the ocean to increase; why not protect it?  A 2015 report on US shellfisheries and ocean acidification by Julia Ekstrom and her colleagues in the journal Nature Climate Change ranks the Gulf of Maine third among regions in the United States most at risk for experiencing the devastating effects of rising ocean acidity. In recognition of the role of eelgrass in reducing ocean acidification, the Maine Commission to Study the Effects of Coastal and Ocean Acidification made the following recommendation (Rec. 4.1): “Preserve, enhance, and manage a sustainable harvest of kelp, rockweed and native algae in bivalve areas and adjacent shoreline and preserve and enhance eelgrass beds”

We must work at the community level to develop context-appropriate solutions to the problems posed by ocean acidification.  On the coast of Maine, eelgrass is an available resource that has the potential to play an important role in the mitigation of ocean acidification; we need to understand threats to eelgrass, protect eelgrass where we can, and restore it where possible.  Every property owner in every coastal watershed can do something to protect eelgrass, at the very least, by limiting the amount of fertilizer that is used on lawns and maintaining septic systems.

On January 22, 2015, eelgrass researchers and others from Maine and New Hampshire who work to study, preserve, and restore eelgrass met at the MDI Biological Laboratory in Salisbury Cove, ME to discuss causes of eelgrass loss and identify possible solutions. This editorial was generated as an outcome of that meeting. Contributors to this editorial include: