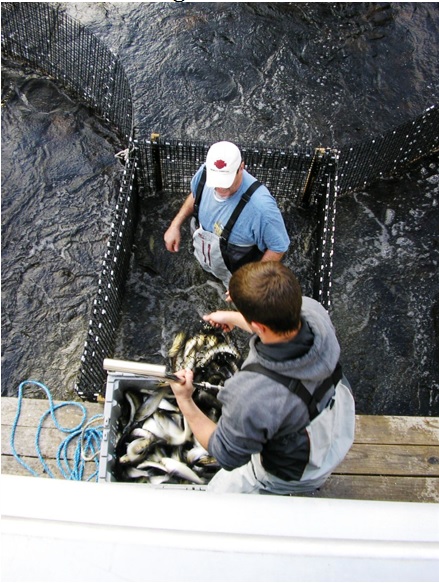 Two local streams, Flanders Stream in Sullivan and the Somes Brook drainage that includes Long Pond and Somes Pond on MDI, have been the focus of local restoration efforts over the past several years. Newly released Maine DMR reports from volunteer counts for both rivers in 2014 showed migrating alewives similar to 2013, which was a banner year on MDI and a strong initial year after a restoration on Flanders Stream. For this report I wanted to focus on the Flanders Stream work and subsequent report written by Claire Enterline of the Maine Department of Marine Resources. We will update work on the Somesville fish run in a future report, although you can see the document written by Ms. Enterline here.

Gary Edwards, the municipal liaison to the Frenchman Bay Partners, who represents the town of Sullivan, has been the energy behind replacing a culvert on Thorne Road in Sullivan in 2012 and redesigning the fish ladder there.  Alewives in Flanders Stream are actively harvested for lobster bait (see photo below), but a portion of the run is allowed to migrate upstream and spawn. This upstream number is estimated at around 15,000, close to the initial goal of 18,715. The weir appears to be working well. The new harvester Tim Briggs has devised a collection scheme that lets some alewives move upstream every day, including the four days a week that he can harvest. The number of volunteer counts nearly doubled from 26 in 2013 to 50 in 2014, giving much better coverage of the run and a much more accurate estimate of the number of alewives allowed to go upstream. The increased effort has actually made it slightly challenging to see how much the run has changed, because now data are taken throughout the entire run, not just in the peak of the run.

This combination of harvesting, conservation and restoration is nothing new to the town of Sullivan. Recently Helen Gordon was conducting research at the Sullivan Town office and came across an 1833 town meeting warrant article where the town agreed to raise $100 to pay individuals at a rate of eight cents an hour to open a fishway, clear Flanders Stream from its mouth to Flanders Pond and chose a fish committee to oversee the work. This gives a documented history of over 180 years of making sure that there is good connectivity between the ocean and the pond, a critical link in the life cycle of river herring.

We applaud the town of Sullivan, Gary Edwards, and all of the organizations that helped to fund this restoration work (The Gulf of Maine Council, National Oceanographic and Atmospheric Administration, U.S. Fish and Wildlife Service, Maine Department of Marine Resources, Maine Natural Resources Conservation Program, and Corporate Wetlands Restoration Partnership), as well as all of the volunteers that have helped monitor this run over the last three years.  We are hoping for a big run next year both for Tim and the Flanders Pond watershed. Anyone interested in helping with counting during next year’s run (late April until early June) can contact Gary Edwards (gandjedwards@gwi.net).