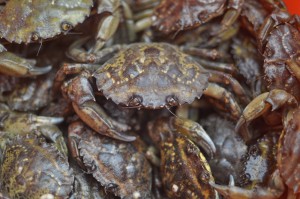 The Frenchman Bay Partners’ plan of restoring an additional 228 acres of eelgrass this summer had to be put on hold when it became clear that eelgrass was not coming back in the restoration areas that had been thriving for years. Not only that, many formerly healthy beds that had been growing at least since mapping began in 1996 were also lost this year. MDIBL’s Community Environmental Health Lab (CEHL) had to quickly change gears to begin studies on possible causes of the loss. Scientists and interns looked into the possibilities of “wasting disease” (the pathogen Labyrinthula zosterae) which caused devastation to the plant in the 1930s, nutrient deficiency in the sediment, temperature changes, and invasive green crabs.

George Kidder, a staff scientist at MDIBL, deployed some new temperature trackers to begin keeping more detailed records of temperature in the upper bay, and Shannon White, a marine specialist at MDIBL, conducted studies of the habitat where eelgrass had been growing, sampling for organisms in the sediment, seining for fish, and collecting larvae in the water column, which will be used as baseline data for comparison if and when the eelgrass returns. MDIBL Intern Lukas Thorburn conducted many of the studies into causes of the eelgrass loss with scientists at the lab. The results of their experiments indicated that the sediments in areas where eelgrass did not grow back did have sufficient nutrients to support eelgrass growth, that wasting disease was most likely not present in the root remnants left of the lost eelgrass, but that green crabs do cause damage to eelgrass when burrowing. Washed up eelgrass around the bay this summer had frayed stems characteristic of green crab damage. Jane Disney, president of the Partners and director of CEHL, notes that there have been green crabs present in Frenchman Bay for some time, but if they are the cause of the eelgrass loss this year the question remains, what has changed to make them so destructive?

Or maybe the damage was done last year. With 2012’s abnormally warm spring, the eelgrass began growing earlier than usual. It also died back early, washing up in clumps. Many of those plants also had frayed stems. Could the record temperatures of last summer have affected the crabs?

While those studies were going on, the lab reached out to the broader community for help in understanding the scope of the problem. Using a new web app developed by MDIBL Special Projects Manager Duncan Bailey, the public could report locations where eelgrass was and was not growing this summer, along with observations about the ecosystem such as whether or not there were green crabs present. 44 locations have been reported. Camp Kieve-Wavus brought their campers on eelgrass expeditions and added their observed locations to the map on the site. While there were many positive reports of eelgrass beds along the coast, widespread losses in both Maquoit and Taunton bays were also reported.

The lab is currently developing another online data portal for community observations which would function as collaborative naturalist’s notebook. As we work to understand our changing bay, anecdotal information can play a role in revealing broad patterns and pointing scientists toward new studies.