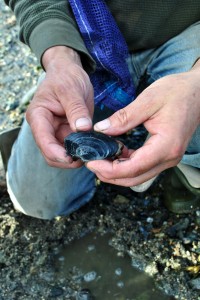 The 610 Project (pronounced six-ten) is a collaboration between the Partners, the Frenchman Bay Regional Shellfish Committee and the Hancock County Planning Commission to build capacity towards the goal of opening closed clam flats in Frenchman Bay. This project received its initial funding from the Maine Community Foundation’s Community Building Grant Program. Through a conservation action planning process, the Partners and shellfish committee have identified the five-year goal of opening all 610 acres of clam flats in Frenchman Bay in which harvesting is restricted due to unknown bacterial pollution sources. They will accomplish this by building capacity within the shellfish committee for watershed surveys and organizational development.

This project has made substantial progress since the grant was awarded in May, 2013. The 610 Advisory Committee formed and is composed of representatives from the Partners, the shellfish committee, marine industries, Department of Marine Resources, colleges and research institutions. The 610 Advisory Committee identified the need to better understand the information sources and decision making around mudflat monitoring and closures. As one advisor commented, when it comes to mudflat closures, it can sometimes seem like “the right hand doesn’t know what the left hand is doing.”

To address this need, the committee hired Paul Davis, one of the leaders of the shellfish committee, to serve as the project liaison. Paul is finishing up the initial scoping phase in which he met with representatives from DMR, including area shellfish biologists and water quality scientists, and other stakeholders to better understand who is involved in monitoring, the status of the closures, priorities for watershed surveys and possible restoration. To support this project, the Municipal Joint Board, which oversees the activities of the shellfish committee, approved the purchase of a computer to build their communication capacities. Paul is collecting email addresses and will soon build a website for the organization. The advisory committee will meet again in October when Paul will provide a report from his scoping meetings and the committee will work with him to determine next steps.