Abstract: Eelgrass (Zostera marina L.) supplies myriad ecosystem services that make it an indispensable cornerstone of coastal environments. The complete disappearance of eelgrass in upper Frenchman Bay, Mt. Desert Island (MDI), Maine, in 2013 matched a precipitous drop in the concentration of dissolved silica (DSi). Eelgrass in outer Frenchman Bay and other locations around MDI appeared to be intact; however there were no DSi data to compare with upper Frenchman Bay locations. To investigate the relationship between eelgrass health and DSi, we determined eelgrass abundance and biomass at six locations around MDI. Furthermore, we measured dissolved nutrient concentrations in the water column as well as tensile strength and nutrient composition of tissue samples. We found a positive relationship between eelgrass abundance and biomass, and a positive relationship between biomass and the concentration of nitrite and nitrate. In addition, tensile strength was significantly different across the six sample sites. However, neither abundance nor tensile strength was significantly correlated with nutrient composition of the plants or water quality.  These results reveal a deeper complexity to the issue of eelgrass abundance and tensile strength that requires further nuanced investigation into other factors such as local geography, oceanographic currents, and sediment type as they relate to eelgrass viability.

Eelgrass abundance (A) and biomass (B) differed significantly across sample sites. The boxplots show the median, the first and third quartiles, and the lower and upper extremes. Different letters indicate significant differences between means. Four data points from Bar East were excluded in the eelgrass abundance analysis; an outlier taken from the edge of a patch and the last three data points were removed to equalize sample sizes. 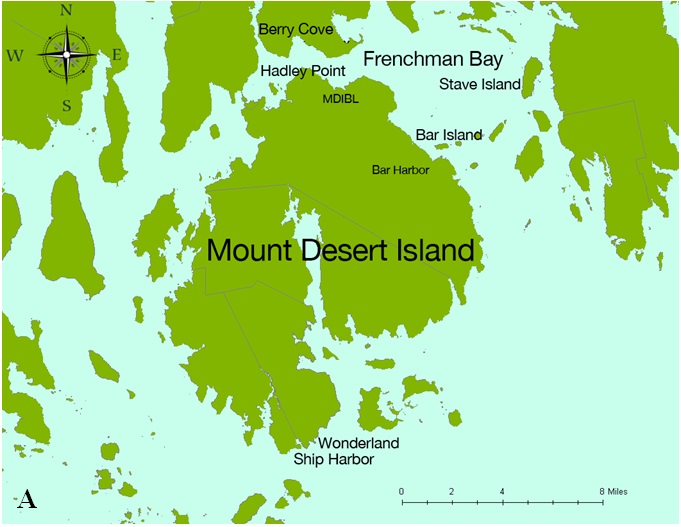 Maps of the study sites around Mt. Desert Island. A: the entire island with the position of the six study sites relative to one another. 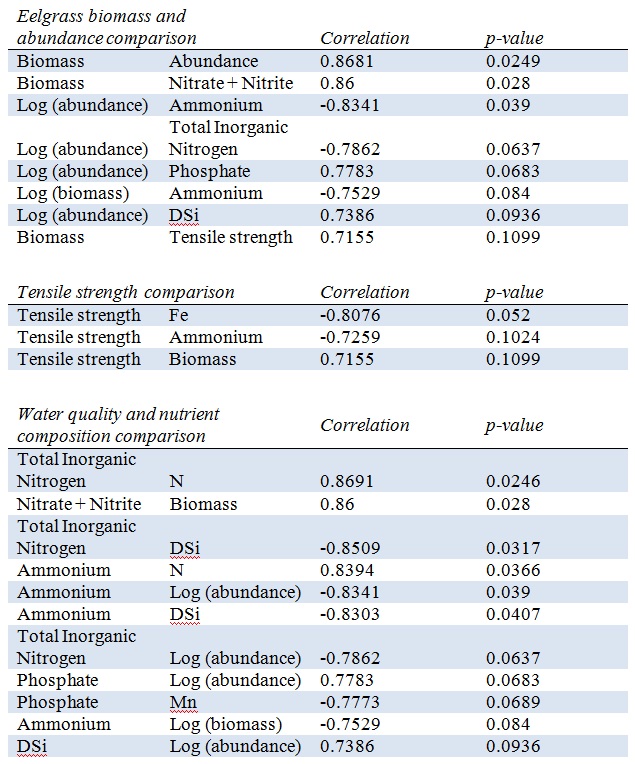 I am extremely grateful to Drs. Jane E. Disney and George W. Kidder III for mentoring me this summer and bringing this research to fruition. I offer my thanks to Mary Badger, Anna Farrell, Claire Thompson, Chris Krasniak, and the multitude of CEHL and YELP volunteers that helped gather from the field and in the laboratory the data presented in this manuscript. I am also appreciative of the analytical work of Bruce Hoskins and Maura Thomas at the University of Maine, the advice of Dr. Peter Herman from the Royal Netherlands Institute for Sea Research, The Netherlands, and Dr. Joseph Heckman from Rutgers University, NJ, as well as the generous contribution of Bob Vasily, president of Canadian Wollastonite. Thank you to Jarod Rollins, Ben King, and the Handbook of Biological Statistics for their help with statistical analysis, and Terry Towne for transportation to field sites. Finally, I thank Mount Desert Island Biological Laboratory for hosting me this summer and facilitating these investigations. This research was funded by NSF REU site at MDI Biological Laboratory (NSF DBI-1005003).