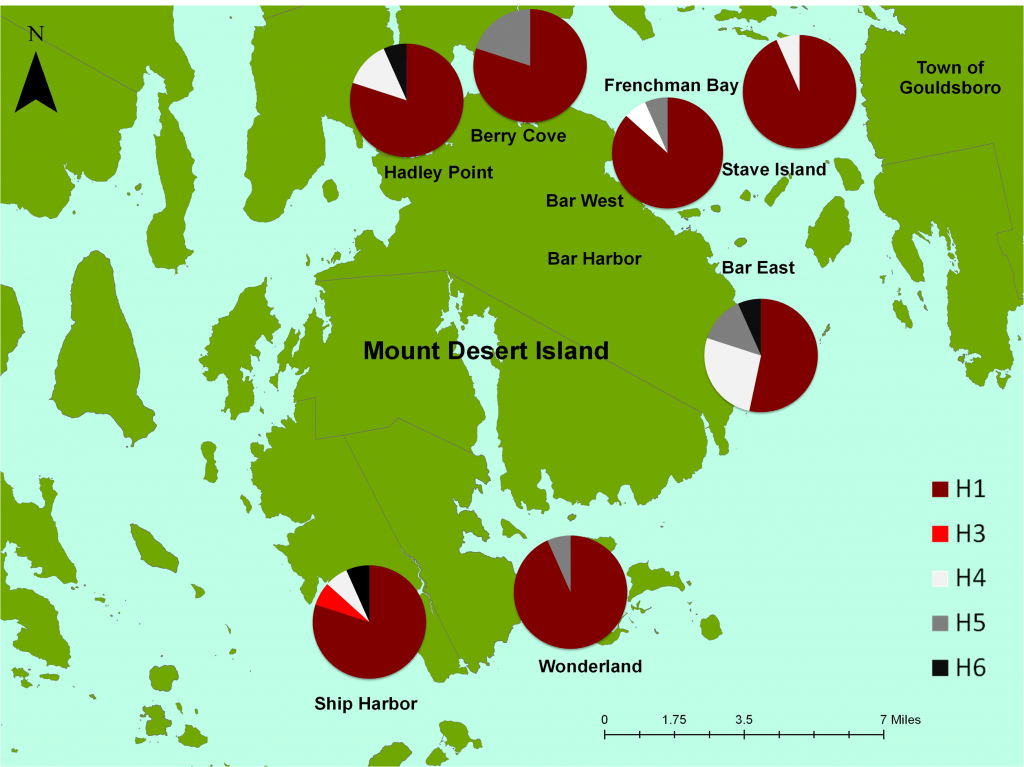 Abstract: In 2013, there was a devastating loss of eelgrass (Zoestra marina) in upper Frenchman Bay, Mount Desert Island, Maine. This study examined the relationship between the most recent invasion of novel haplotypes of the European Green Crab (Carnicus maneas) and the decline of eelgrass in upper Frenchman Bay. While C. maneas is an invasive species that has been present in the Gulf of Maine for over 100 years, a second invasion of C. maneas in Nova Scotia occurred during the 1980s and 1990s, bringing novel haplotypes of the species that have been cited to be more cold tolerant and voracious as compared to other haplotypes.  The presence of these new haplotypes has been hypothesized to be a contributing factor to habitat destruction along the Maine coast. In 2013, northern haplotypes of green crab were documented in upper Frenchman Bay where the eelgrass had disappeared. In order to assess this relationship, the cytochrome oxidase I (COI) haplotype of the crabs at sites around Mount Desert Island was determined as well as the abundance of the eelgrass at corresponding study sites. The study did not find a significant correlation between the presence of northern green crab haplotypes and eelgrass abundance at the study sites. This indicates that the status of eelgrass health is not dependent on the genetic composition of green crabs that are present.  It is more likely that factors such as green crab abundance or water quality are contributing to the declining health of eelgrass beds along the Maine coast.

Figure 1. C .maenas haplotype frequencies of a 500 bp region of the cytochrome oxidase I gene (n=15 per site). Pie charts indicate proportion of haplotypes found from each population. Haplotypes in dark red, red, and orange are of the southern variety; haplotypes in black, grey, and white are of the northern variety. 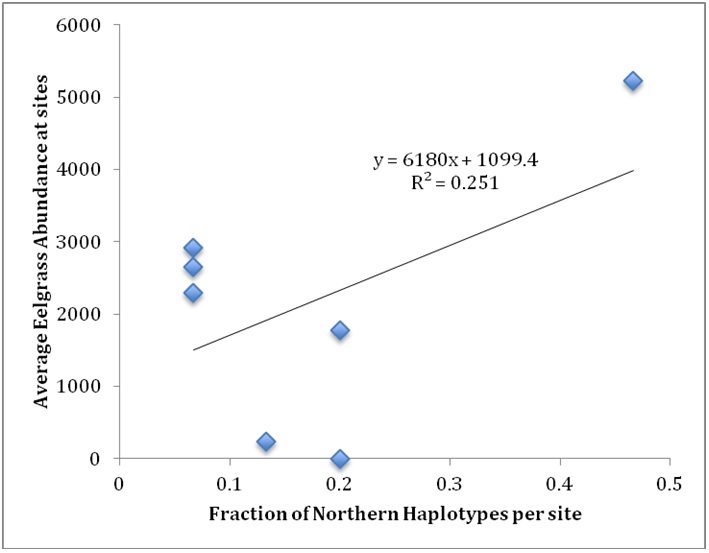 Special thanks to AmeriCorps Environmental Stewards Jirias Charabati and Claire Thompson for their help with crab and eelgrass data collection. Thank you to Terry Towne from Maine Coast Heritage Trust for captaining the boat that brought us to some study sites. Thanks to Mount Desert Biological Laboratory for sequencing. This project was funded by the NSF Research Experience for Undergraduates Site at MDIBL, DBI-1005003. Research reported in this project was supported by an Institutional Development Award (IDeA) from the National Institute of General Medical Sciences of the National Institutes of Health under grant number P20GM103423, the Center for Regenerative Biology and Medicine at MDIBL (Grant USA MRMC W81XWH-11-1-0425), Long Cove Foundation, and the BODIL SCHMIDT NIELSEN Fund.